I have always considered myself a tough, strong willed individual. Just to give you some perspective, I own 4 Tap Out shirts, drink craft beer, and have  barbed wire tattoos on both my biceps. With that being said, I needed a pen that could match my tough guy persona. Also for practical purposes, as a guy who likes to pick unprovoked fights with people, I always want to make sure that I am able to adequately defend myself. After doing some research, I eventually stumbled onto this bad boy – the Atomic Bear Tactical Self Defense Pen. 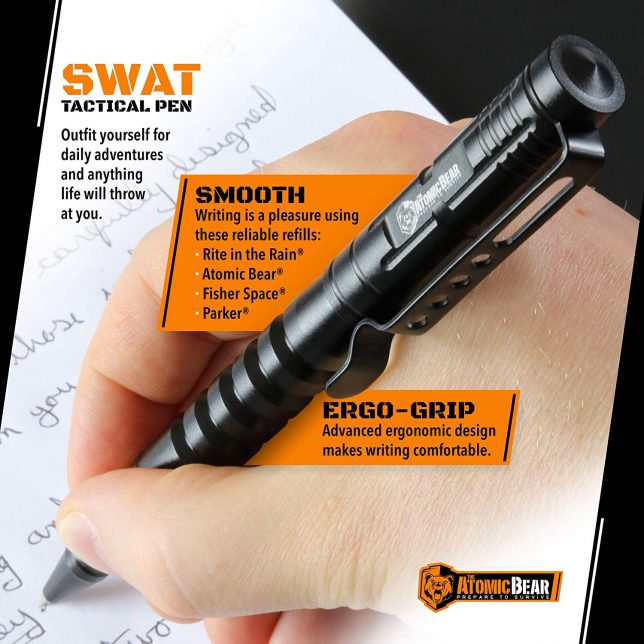 I know what you are probably thinking, “this pen is amazing, but how can I possibly learn how to master using this pen in armed combat without training from an instructor?” Don’t worry, this pen comes with free online training when you purchase it. When I first found this out I breathed a sigh of relief.  As a mixed martial artist, trained in both Tap Out and WWE wrestling, I know how difficult it can be to master a self defense craft.  However, watching the online lessons allows you to hone your tactical pen combat skills from the convenience of your home. You’ll be able to develop the confidence you need to consider using a pen in armed combat.

The Atomic Bear Tactical Pen is made from sturdy military grade aluminum. It will not rust. It uses refillable ink and writes smoothly. The pen is designed to be used as a self defense weapon. Moreover, the pen doubles as a glass breaker in case you need to break a window. 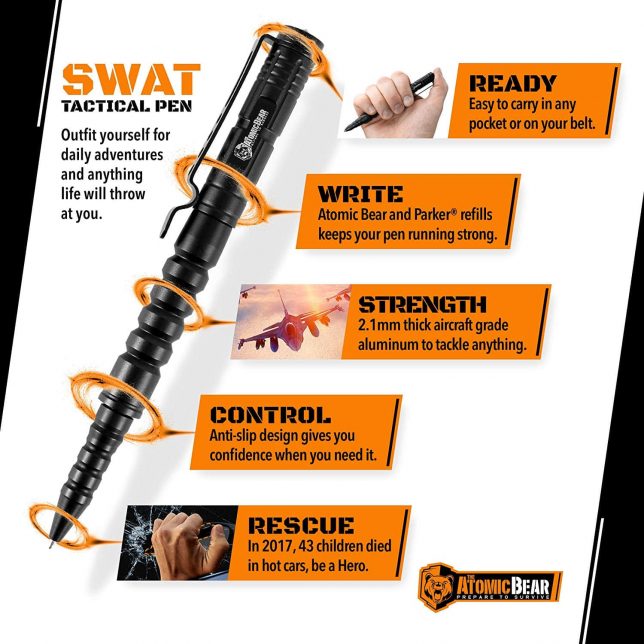 To really test out the strength of this pen I decided to enlist with US special forces and do a tour in Afghanistan using only my tactical pen. While I was initially hesitant about joining the military, I thought it would be the the best way to test out my new purchase after completing my online training. 56 confirmed kills later, and this pen has stood up to its [promises. While missions in the US special forces are usually team based, after the higher ups noticed my lethal efficiency, they began sending me on solo missions – oftentimes to  assassinate terrorist leaders.

In every mission, I only brought with me my tactical pen. In one mission, I was tasked with taking out an ISIS leader in the Andudigar province of Iraq. Dressed as a women, I infiltrated the village he was hunkered up in. While the higher ups insisted there was no reason that I would need to dress as a woman, I insisted on it.  After locating the safe house in the village where he was hiding, I busted the door down and was greeted with a barrage of bullets. Thanks to my online training, I was not scared in the slightest and knew exactly what to do. I quickly began spinning my tactical pen to deflect the bullets that were being shot at me. Some of the bullets ricocheted back at my attackers killing some of hem. I was then able to quickly somersault myself close enough to the other terrorists that were still standing and incapacitate them with swift strikes with my tactical pen.

Once everyone on the first floor was down, I entered the second story of the building where the ISIS leader was hiding. As soon as I entered he threw a grenade at me which I quickly deflected to the side of with my tactical pen “You’ll have to do better  than that” I said to him. After 10 minutes of hand to hand combat,  I overcame him using my tactical pen and was able to bring him back alive to our US military base.

The one drawback I have noticed to owning this pen is that the confidence you gain from said ownership can be intoxicating. When I carry my tactical pen with me, I feel like as if I can handle myself  in any  combat situation. No foe is too strong from me. Even outnumbered, I know with just my combat pen and my online combat training, I can completely devastate my enemies. Sometimes I have to be careful, because just the wrong look from someone, or mispronunciation of my name, could set me off and make me unleash the devastating force of my combat pen. Anyone considering purchasing this pen should consider taking lessons in yoga and meditation to avoid allowing the power of the pen take over their personalities.